Yesterday saw the release of Apple’s MacBook. I have one in my hands (and am in fact typing this from it). I got one of the last half dozen in the store, I believe.

This is sort of a review. I know, you are thinking what does this have to do with genealogy, but this is going to be my genealogy platform of choice for the next few (hopfeully several) years, and I’ll explain why in a moment (if you are interested in Macs, but have some Windows-only applications, read on, you’re in luck).

First, to get the technical stuff out of the way. It’s one of the cheapest (if not cheapest) Intel Core Duo notebooks with a 13.3-inch widescreen that you can find – starts at around $1099. I’m talking Dell, HP, Lenovo, Toshiba, etc. Having an Intel Core Duo is basically the equivalent of having two processors/CPUs in the machine. The screen is wonderful – I’ve always liked widescreen displays because I tend to have a lot of stuff open at the same time, or what I’m doing would benefit from a widescreen in some manner, and on a laptop, having a widescreen is a spacesaver – it’s a little wider than a normal 12-inch display, but it’s not quite as deep. For my eyes, the 13.3 is about as small as I want to go for the time being.

Now then, if you are like me and are holding onto a few Windows applications – especially those related to genealogy – those of you who have been reading RandomGenealogy for a while know I’m cranky when it comes to genealogy applications – namely that I can’t do without applications like GenSmarts and Clooz, then you are in luck.

You have two options for Windows on one of the new Intel Macs. The first is Boot Camp from Apple. It’s basically a way to allow you to dual-boot either Mac OS X or Windows (that is, you select an Operating System at start up). It’s not the most elegant of solutions, and only works with Windows XP Service Pack 2. I say it’s not elegant because you are still going back to a Windows only environment until you reboot into Mac OS X. It is great if you play games (more on that in a moment).

The second option, the one I like, is Parallels Workstation. It creates a virtual environment under Mac OS X, to run just about any version of Windows or DOS (yes DOS) as well as Linux and some other operating systems, inside of a window under Mac OS X: 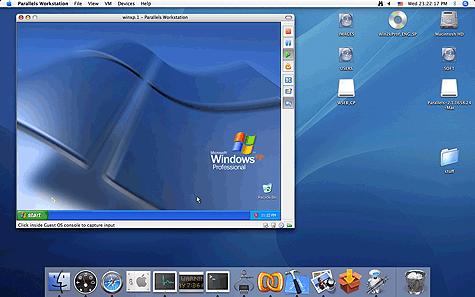 I can take the old copy of Windows 98 I had and install it, and it’s running inside of a window (or fullscreen if I want) under Mac OS X, and I can share files back and forth between the two. Literally it’s Windows 98 running under Mac OS X, and because of the Intel processor, it runs just about as fast as it would if it weren’t running under Mac OS X – in my case it’s faster than running under the old machine that I had running Windows 98 (which has stopped working long ago). If Windows crashes, no big loss, I can restart it without actually restarting the machine itself. I mentioned games earlier – Windows games won’t run well under Parallels Workstation because of hardware issues, so in that instance you’d have to go with Boot Camp. Everything else – Photoshop, Windows genealogy programs, Microsoft Office etc. all run just fine, can access the internet, etc. (all though I should pick up Mac OS X native versions of Photoshop and Office).

I’ve always liked Macs and Mac OS X, and I like some of the software that’s been coming out – like Memory Miner, and some of the genealogy software has really come a long way.

Now I can easily move back and forth between Windows and Mac on the same machine, Windows runs just about as fast as it would on a non-Mac, and maybe someday I’ll complete my transition to Mac, but even if it takes a few years, that’s okay.

Something to think about.